The invasive emerald ash borer (Agrilus planipennis) was discovered in North America in Michigan in June of 2002. This insect is native to East Asia and was accidentally was brought to the United States in the wood of shipping crates from China. It is a species of metallic wood boring beetle (Family Buprestidae) that attacks true ash trees (Fraxinus spp.), usually killing trees in one-three years when beetle populations are high. When beetle populations are low (i.e., a new infestation) it can take 5 or more years for trees to die.

Where has EAB Been Found?

This beetle has been found in 35 states and 5 Canadian Provinces (map). The Federal EAB quarantine covers much of the eastern US, with scattered detections in South Dakota, Nebraska, Kansas, Oklahoma, Texas, and Colorado. EAB was first found in southeast Wisconsin in July of 2008, southwest Wisconsin in April of 2009, and was detected in Brown County (Green Bay area) in July 2009. Since then, infestations have been discovered throughout the southern half of Wisconsin and several of the Northern counties. A map showing the history of county-level EAb detections can be found here.

Previously, the EAB quarantine in Wisconsin was determined on a county-by-county basis.  However, as of March 30, 2018, the entire state has been placed under quarantine.  An interactive map showing Wisconsin municipalities with known EAB infestations can be found here.  For additional details of the EAB quarantines in Wisconsin, visit the Wisconsin DATCP EAB website.

Emerald Ash Borer (EAB) is an aggressive wood borer that attacks and kills all species of true ash. Ash trees of any size or age can be attacked and both healthy and unhealthy trees can be killed. Ash wood is economically important and is used in making flooring, baseball bats, tool handles, cabinets, and other materials. It is estimated that there are well over 770 million ash trees in Wisconsin (nearly 7% of Wisconsin’s trees).  In many urban areas, ash trees often make up approximately 20% of the urban forest.

Many homeowners in Wisconsin are having to deal with the emerald ash borer as it gets to their part of the state.  See the Considerations for Homeowners page and the management factsheets for guidance on what to do about EAB.

This article was posted in EAB.

(April 2021)
The Homeowner Guide to Emerald Ash Borer Insecticides has been updated for 2021.

(April 2021)
The Professional Guide to Emerald Ash Borer Insecticides has been updated for 2021.

(August 2020)
EAB was recently detected in Dunn, Oconto, Pepin and Shawano counties for the first time. To date, 56 of the 72 Wisconsin counties have confirmed reports of the emerald ash borer.

(April 2019)
A new publication on the dangers posed by EAB infested trees was recently created by the Wisconsin DNR.  This publication can be found on the News and Resources page.

(April 2019)
The factsheet Is My Ash Tree Worth Treating for EAB has recently been updated.

(March 2018)
The state EAB quarantine has been extended over the entire state of Wisconsin.  A full press release on the topic can be found here. 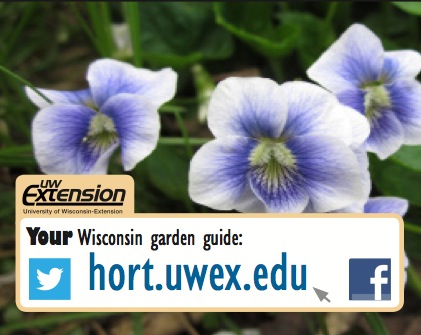 If you Suspect EAB:

Contact your local UW-Extension office for assistance with identification and management recommendations.