A wide range of insects, plant diseases, and other things can harm ash trees.  The USDA-Forest Service has an in-depth publication available to help identify many of these maladies.

There are many other insects that can be found under the bark of ash trees. It is important to be able to distinguish native insects found in dead and dying trees from the non-native Emerald Ash Borer.

Eastern Ash Bark Beetle is associated with severely stressed or recently-dead ash trees. It leaves small round exit holes and the larvae leave distinct galleries that run perpendicular to the wood grain.

A number of native Agrilus borers in Wisconsin attack birch, honeylocust, oak, and other trees and shrubs.  Some of these native species include the Bronze Birch Borer and the Two-Lined Chestnut Borer.  These native insects bear a strong resemblance to EAB, but do not attack ash trees.  There is one native species, Agrilus subcinctus, that can infest ash trees.  This species is not commonly encountered and is about half the size of EAB; it attacks stressed ash trees and prefers to infest small branches and twigs.

Ash Borer is a native clear wing moth that can kill smaller trees. This moth leaves round pencil sized holes in the trunk. Unlike EAB, this insect removes frass from its larval galleries.  The frass tends to pile up around the base of the tree and looks like a small pile of sawdust.  Look for pupal case or exit holes on trunk or larvae in the wood.

The red headed ash borer is a native long-horned beetle with distinct coloration.  This borer attacks stressed or dead hardwood trees, including ash trees.  Exit holes are round and ~1/4″ in diameter.

Distinct, globular galls can often be seen in the canopy of ash trees from some distance.  These galls are caused by the ash flower gall mite, which is not a true insect. While unsightly, these galls pose little actual threat to the health of the tree.

Tress, including ash trees, can be affected by a wide range of plant diseases, including bacterial, fungal, viral, and other diseases.  Properly diagnosing plant diseases can be challenging,  Contact your local Extension office or the UW Plant Disease Diagnostic Clinic for assistance. 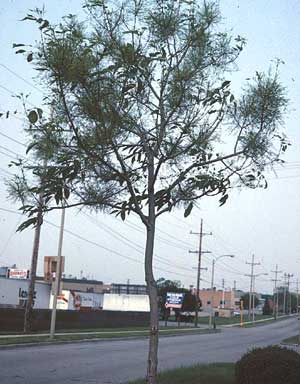 The most common source of ash canopy thinning and death in Wisconsin is a fungus disease called Verticillium. The fungus clogs the vascular system resulting in leaves with a “scorched” appearance; the canopy also thins. Tree symptoms look very similar to Emerald Ash Borer but there will be no S-shaped galleries under the bark and no D-shaped exit holes on the trunk.

Ash Yellows is another disease that causes trees to decline and die over time.  Ash yellows is caused by a bacteria-like organism known as a Phytoplasma. It is thought that leafhopper insects can carry the disease from tree to tree.  Infected trees tend to have small chlorotic (discolored) leaves and may display “brooming” at the tips of branches.

A wide range of insects, plant diseases, and other things can harm ash trees.  A printable guide from Iowa State is available here. A more comprehensive publication is available from the USDA-Forest Service.